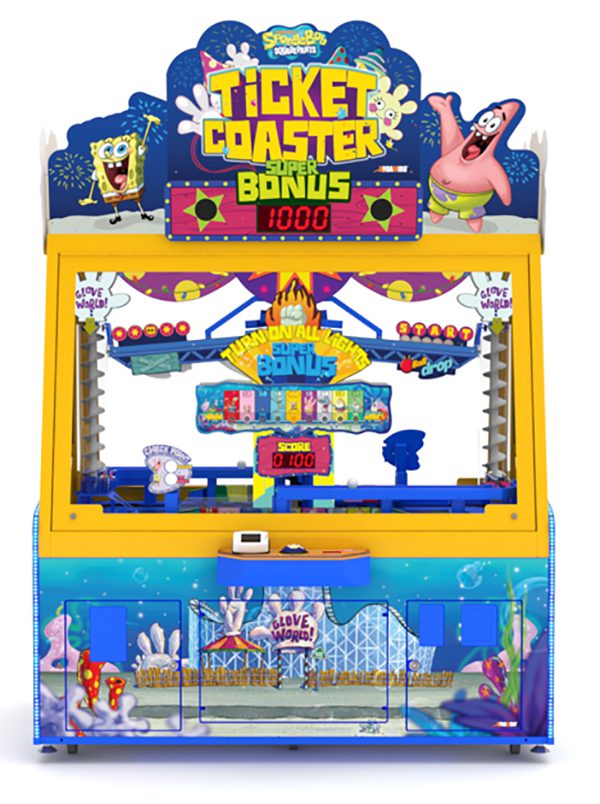 I will definitely be looking into this!

IRVING TX, Nov. 8, 2021 – Andamiro’s new SpongeBob SquarePants Ticket Coaster is an entertaining gravity game for players of all ages. Players start the mechanical action by dropping a ball into a helix launcher, or corkscrew, which in turn deposits the ball onto a track to complete the ride.

The object of the game is to accurately time the landing of a ball into the opening of one of the roller coaster cars. There are nine cars with nine corresponding ticket values. Players experience the excitement of a Jelle’s Marble Run race, only better – they win tickets! When a player lights up all nine ticket values, they win the super bonus.

Andamiro’s new SpongeBob amusement device is packaged in an attractive two-player cabinet with two trains that circle the playfield and two corkscrew ball-drop gadgets. The player stations are positioned on opposite sides of the cabinet. It measures 71” wide by 55” deep by 101” high and weighs 952 lbs. (unpacked).

“Based on collection reports, I think SpongeBob Ticket Coaster will be a big hit!” said Andamiro USA president Drew Maniscalco. “The gameplay is very unique, and the cabinet has two player stations in an island configuration. As with all our SpongeBob games, the artwork is just beautiful, and its features are fun and exciting.”

SpongeBob Ticket Coaster will be on display in booth No. 1800 at the IAAPA Expo in Orlando, FL. It ships in the first quarter of 2022.

Tim Acord March 4, 2022
Share this ArticleLike this article? Email it to a friend!
Email sent!